►A piece of the vest of Blessed Justo Takayama (1552-1615) was presented to Manila Archbishop Cardinal Luis Antonio Tagle by Kyoto Bishop Paul Yoshinao Otsuka, chair of the CBCJ Committee for the Promotion of Saints. The presentation was made at the Arzobispado in Manila, on Thursday, Oct. 19, 2017.

The full Takayama vest had been presented as a second-class relic during the Takayama Beatification Rites in Osaka on Feb. 7, 2017, which was presided by Cardinal Angelo Amato, SDB, Prefect of the Congregation for the Causes of Saints, on Pope Francis’s behalf.

Other pieces (uniformly encased in a golden reliquary) have been  presented to the principal Catholic churches in Osaka, Takatsuki and Kanazawa – all cities that figured in the life and career of the Christian daimyo Justo Takayama Ukon. The presentation in Manila – where Blessed Takayama died on Feb. 3, 1615 — completes the obligation to share the relics with Takayama devotees.

Another relic from the same cloth has been presented earlier to the Vatican. 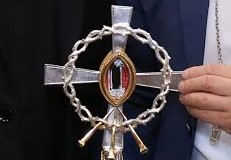 Rev. Fr. Reginald R. Malicdem, Chancellor of the Archdiocese of Manila, Rector of Manila Cathedral, and Secretary of Cardinal Tagle, has announced that as of Oct. 27, “we have not yet decided on where the relic is going to be displayed and on the times it will be available for veneration.  Once we have decided on this, we will let [the faithful] know.” ◘

3 thoughts on “Relic of Blessed Takayama Presented to Cardinal Tagle”