►In his homily, Manila Archbishop Luis Antonio Cardinal Tagle set the tone of the Eucharistic Concelebration: “Through Blessed Ukon Takayama [‘martyred’ in Manila, Feb. 3, 1615], through St. Lorenzo Ruiz [martyred in Nagasaki, Sept. 29, 1637] — Japan and the Philippines will always be one. Let us give witness to the world of the power of love that comes from the heart of Jesus. Let us now pause and continue thanking God for the gift of Jesus, the gift of mission and the gift of the great martyrs like Blessed Ukon Takayama.”

Paco Parish Church (where parishioners number some 92,000) is the first church in the Philippines that enshrined an altar statue of Blessed Takayama on Dec. 21, 2017 — 403th anniversary of the 1614 arrival of ‘Lord Takayama and 350 Japanese Christian Exiles.’

RECALLING that Lord Takayama and thousands of Japanese Christians were refugees in the Philippines, one Tokyo-based Filipina pilgrim, Puchie Gan, a member of the ‘Gathering of Filipino Groups and Communities’ (GFGC), writes: “Blessed Justo Takayama Ukon whose faith was unwavering and who lived a life of holiness until his death” … serves as the inspiration to Filipino migrants in Japan.

◘ 11:00 AM, Saturday, Feb. 3, 2018 — Manila Cathedral Celebrates the First Feastday of Blessed Takayama (1552-1615) – a true ‘Son of Manila.’ In Church rubric, ‘where one dies, is where one is born to Heaven.’ That’s why the Manila Archdiocese proposed Takayama as the first saint of his adopted country, the Philippines in 1630.

The main celebration at the Manila Cathedral involved prelates from the Philippines, Japan and the Vatican.

Music was furnished by the Manila Cathedral Ministry of Music.

The Mass vestments (see photos above and below) bore the logo used at the Blessed Takayama Beatification Rites. The logo was designed by Sr. M. Esther Kitazume, of the Sisters of Disciples of the Divine Master.

The emblem reproduces seven round circles of the Takayama family, with the Cross and three rings in the background. Each circle represents members of Ukon’s family and also the seven sacraments and seven gifts of the Holy Spirit. The Cross is a sign of Ukon’s offer of his life for faith.

The Takayama Thanksgiving Mass, including the homily, was livestreamed at https://www.facebook.com/justotakayamaukon/?hc_ref=ARQ75P7y0iL0uEHvBsgPDM8nBkl7DscKd7DoJ7nzajtgGfj0kZvl4kgHDj4YfW7-QFA
This video will be on permanent file.

Text of Cardinal Tagle’s Homily Is Also Posted at Facebook

The text of Cardinal Tagle’s homily is posted at https://www.facebook.com/justotakayamaukon/?hc_ref=ARTgrfE5rJYIwnXObnSor-C9JSvlYmxsdc49JqF5ajZX7XqIKi2tF7cjkxClxhRPm_4&fref=nf

MANILA ARCHBISHOP Luis Antonio Cardinal Tagle enjoined the Filipino faithful and Japanese pilgrims: “Be martyrs … by giving yourself to others and finding meaning in suffering.”

Cardinal Tagle urged the faithful to emulate Blessed Justo Ukon Takayama, a Japanese Christian who was persecuted for his faith and died in exile in Manila.

BUT IN THESE MODERN TIMES, Cardinal Tagle pointed out that one “does not have to wait for martyrdom” and that Catholics “are invited to be martyrs every day.”

“Every day, we are asked by Jesus to be with Him, to be witnesses to His love. So give yourself to others and be united with them in their suffering,” Tagle said.

In his homily, Tagle cited Blessed Takayama’s life, especially his choice to remain true to his faith even if he had a chance to save himself by simply renouncing it.

“He knew the dangers, he was given a chance to turn away from Jesus and his faith. But he remained faithful to Jesus. Others said he was crazy for not saving his life,” the prelate said.

But in today’s times, Blessed Takayama’s “foolishness” is now a source of wisdom and strength for Catholics, Tagle said.

The prelate added that the Christian understanding of suffering is to give life to others in an ultimate act of love.

“It is not looking for suffering because we enjoy it. It is love, it is mission, it is a gift of self that gives someone like Jesus the strength to suffer and die. With love, you can suffer meaningfully and in a manner that gives life to others,” Tagle said.

Tagle added: “Have no fear, love and when you love you will have the strength to suffer. People who love but are afraid of suffering do not know how to love.”

BLESSED JUSTO TAKAYAMA was a Japanese samurai and ‘Daimyo’ (feudal lord) who lived during the Sengoku period (戦国時代 Sengoku Jidai, “Age of Warring States”; c1467–c1603) in Japan, and was baptized as a Catholic with the name, Justo, when he was only 12.

In 1587, Christians were ordered expelled from Japan and all Christian feudal lords asked to renounce their faith.

REFUSING TO GIVE UP his faith, Blessed Takayama was expelled from his feudal domain of Akashi in 1587 – and became a ronin, a masterless samurai. In the first year, he was protected by well-placed Christian allies.

He and his family – wife Justa Takayama, married daughter Lucia Yokoyama, and five grandsons – were eventually forced to leave their homeland. Given a choice between Manila and Macau, he chose Manila because his Spanish Jesuit father-confessor, Fr. Pedro Morejon, SJ, was Manila-bound. The overloaded Chinese junk, which normally sailed the route from Nagasaki to Manila in 20 days, took 43 days to reach Manila, as it was buffeted by a severe typhoon that snapped its main mast into two, off the coast of Bataan.

However, 40 days after his arrival (on Jan. 30), he fell ill “of a tropical illness,” and – like St. Francis Xavier who died several days after falling ill on Shangchuan Island, off the southern coast of Guangdong, China on Dec. 3, 1552 (the year Ukon was born) – Ukon died on Feb. 3, 1615. His sojourn in Manila lasted only 44 days – as the cunning Tokugawa Ieyasu had hoped for.

When Pope Francis’ Decree of Martyrdom was issued on Jan. 21, 2016, Fr. Anton Witwer, SJ, Jesuit General Postulator, explained: “Since Takayama died in exile because of the weaknesses caused by the maltreatment he suffered in his homeland, the process … is that of a martyr.”

In his decree, Pope Francis recognized Justo Ukon Takayama as a “loyal Japanese layman, who was martyred in Manila in 1615.” The Holy Father said: “Rather than compromise, Ukon renounced honors and prosperity and accepted humiliation and exile. He remained faithful to Christ and to the Gospel; for this, he is a wonderful example of strength in the faith and dedication in charity.”

►During the Takayama Thanksgiving Mass, the Bishop of Laoag, Msgr. Renato Mayugba entreated the Japanese Bishops to make Laoag Diocese the first outside Manila to enshrine a Takayama altar statue — at St. William Cathedral (est. 1580; current church built in 1612).

THE DIOCESE OF LAOAG has 22 parishes – and a ‘Japanese connection.’
In 1620, fisherfolk found two crates floating in the sea off the shores of Badoc town, Ilocos Norte — presumably off-floated from a Japanese church desperate to save them from destruction by the Tokugawa Shogunate.

One crate contained the statue of the ‘Black Cristo Milagroso’ — (as ebony as the ‘Black Nazarene’ at Quiapo) — now enshrined in Badoc’s adjoining town, Sinait, Ilocos Sur.

The other crate contained the statue of the Blessed Virgin — “with Japanese features” — cradling the Infant Jesus in her arms. The Marian statue is revered today as ‘La Virgen Milagrosa de Badoc.’ Devotees call her “Mary, Cause of Our Joy — Patroness of Ilocos Norte.”

The canonical coronation of “La Virgen Milagrosa de Badoc” is on May 31, 2018.

At the Sidelines of the Takayama Feastday

For the first time since the Catholic Bishops’ Conference of Japan (CBCJ) presented the Manila Cathedral with a Takayama Relic – church-goers were invited to venerate it. 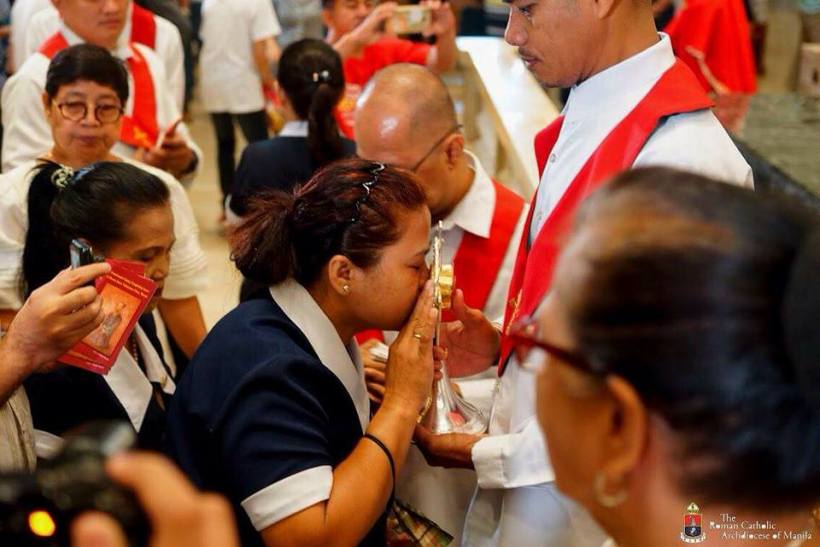 Prayer cards in Tagalog were distributed by both the CBCJ and the Manila-based Blessed Justo Takayama Canonization Movement.

The CBCJ prayer cards enjoined – in Tagalog – all Takayama devotees to report any purported “miracle through the intercession of Blessed Takayama” – to the Bishop of the Diocese where the miracle happened. For better coordination – whatever country it is from – also inform <blessedtakayama@gmail.com> and <ernestodepedro@gmail.com>. The concerned ecclesiastical authorities will be alerted.

Some severe medical cases imploring Blessed Takayama’s intercession attended the Mass. For months they had been praying on the basis of ‘estampitas’ or prayer cards. Now, the Takayama Movement presented those on its waiting list — with 12” Takayama statuettes to help them focus on their devotion.

The Jesuit Compound (now the PLM Campus), is where Lord Justo Takayama sojourned for 44 days (since arriving on Dec. 21, 1614); died on Feb. 3, 1615 – and was buried near the High Altar of the Jesuits’ Santa Ana Church, in the Jesuits’ expectation that he would soon be raised to the honors of the High Altar.

For the first time in 403 years – Japanese pilgrims step on ‘hallowed ground’ as they visit the Pamantasan ng Lungsod ng Maynila (PLM) where the University Chapel was inaugurated by Cardinal Jaime Sin on Dec. 17, 1990.#

Having no Takayama ‘estampitas’ — in English or Tagalog — to focus on, a Filipino cancer patient in Tokyo drew his own imaginings of what Takayama looked like.

The ‘Paintings/Sketches of Blessed Takayama’ by the Filipino artist +Noel Velez (1951-Jan. 14, 2018) as he lay dying in a Tokyo hospital – and died only 20 days before the Takayama Feastday in Manila — was published in a slim booklet by his widow Puchie Gan – and presented to Cardinal Tagle before the Takayama Thanksgiving Mass on Feb. 3, 2018.

A graduate in Bachelor of Philosophy from the Our Lady of the Angels Seminary, Noel moved to Tokyo in 1990 to join his wife, Puchie Gan. He worked as Staff Designer for Sesame Street/Japan and served as Musician and Pastoral volunteer in the Archdiocese of Tokyo. The passion for the art was heightened during the battle with cancer of the lungs. Blessed Justo Takayama Ukon whose faith was unwavering and who lived a life of holiness until his death served as the inspiration for all the artwork in this book.

One thought on “First Feastday of Blessed Justo Takayama (Feb. 3, 2018) – A Philippines-Japan-Vatican Concelebration”