►Lord Justo Ukon Takayama (高山右近) — then already in domestic exile in Kanazawa, capital of Ishikawa Prefecture, on Japan’s central Honshu Island — was deported by the Tokugawa Shogunate to the Philippines in 1614 for refusing to abjure his Catholic faith. Ukon arrived with his wife, Doña Justa Kuroda Takayama, his married daughter Lucia Yokoyama, and five grandsons, 8 to 16  (all surnamed Takayama) with the first boatload of 350 “refugees and migrants” deported from Japan, docking in Manila on Sunday, Dec. 21, 1614 — to a warm welcome from Manilans.

He was the first Manila Catholic to be proposed for sainthood by the Manila Archdiocese in 1630. He was declared “Servant of God” in 1994. And was beatified by authority of Pope Francis in 2017.

Though there are “over a hundred” different artistic representations of him (*check out Google/Images under “Takayama Ukon”), the Takayama image presented to the Tokyo Cathedral was based on the Takayama statue that was erected as the centerpiece of the Philippines-Japan Friendship Park in Plaza Dilao, Manila in 1977. The version carved by the renowned Paete artist, Paloy Cagayat, shows the “Samurai of Christ,” Ukon Takayama. in a pose associated with St. Ignatius (1491- 1556) — offering his sword in the service of Christ.

►The altar-statue for Tokyo Cathedral, produced by the Prayer Warriors of Blessed Takayama, was sponsored by “The Gathering of Filipino Groups and Communities” (GFGC) in the Archdiocese of Tokyo, chaired by Dr. Maria Carmelita Kasuya, Research Associate Professor at the University of Tokyo since 2001.

►It is the apostolate of the Prayer Warriors of Blessed Takayama in Manila to spread to Catholic parishes worldwide the Takayama statues and figurines (*shown being presented to Pope Francis by Fr. Renzo de Luca, SJ, Father Provincial of the Jesuits in Japan) – as an aid to evoking the memory of this Catholic of heroic virtue, who died a martyr in Manila – the first Manila Catholic to be proposed for sainthood in the Philippine Church. 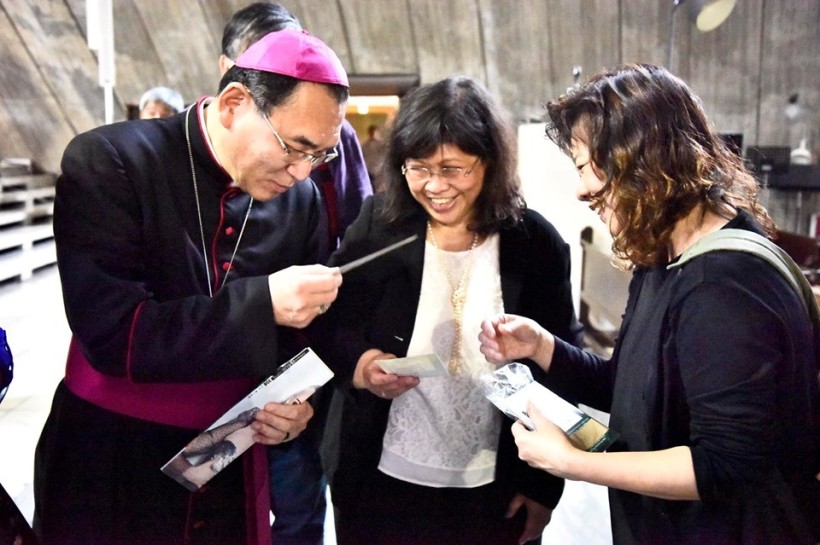 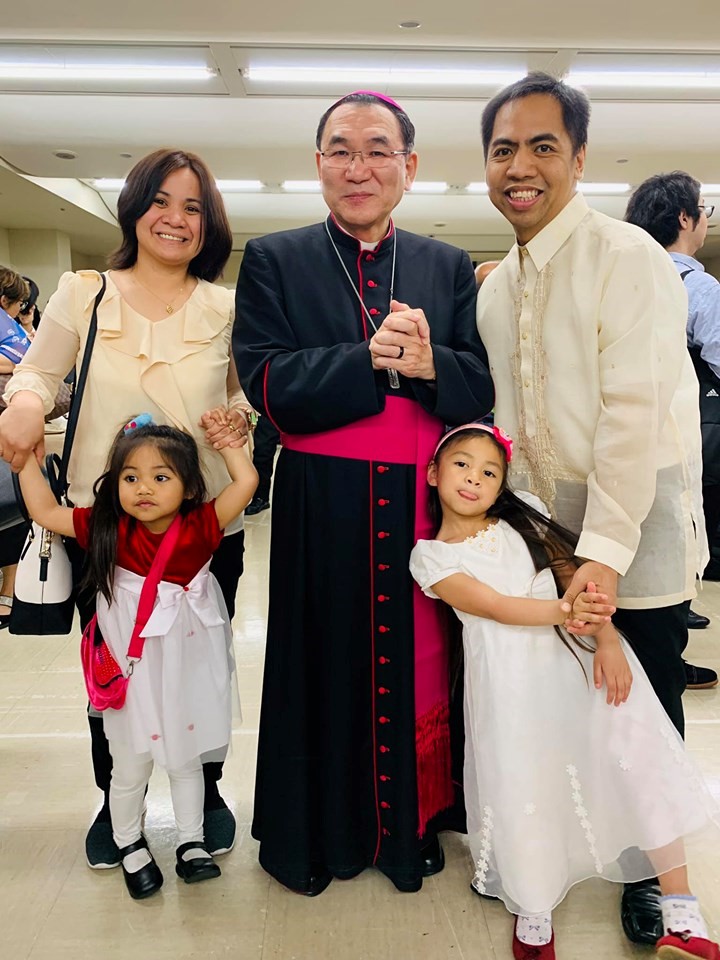 Ushered in by children with flowers and candles

►Children with flowers and candles ushered the procession of four Filipino parishioners who carried the Takayama statue into the Tokyo Cathedral. 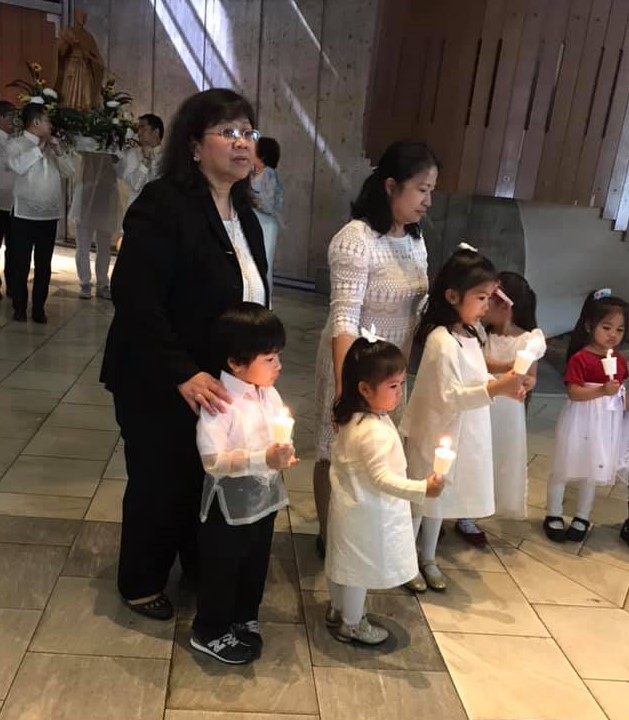 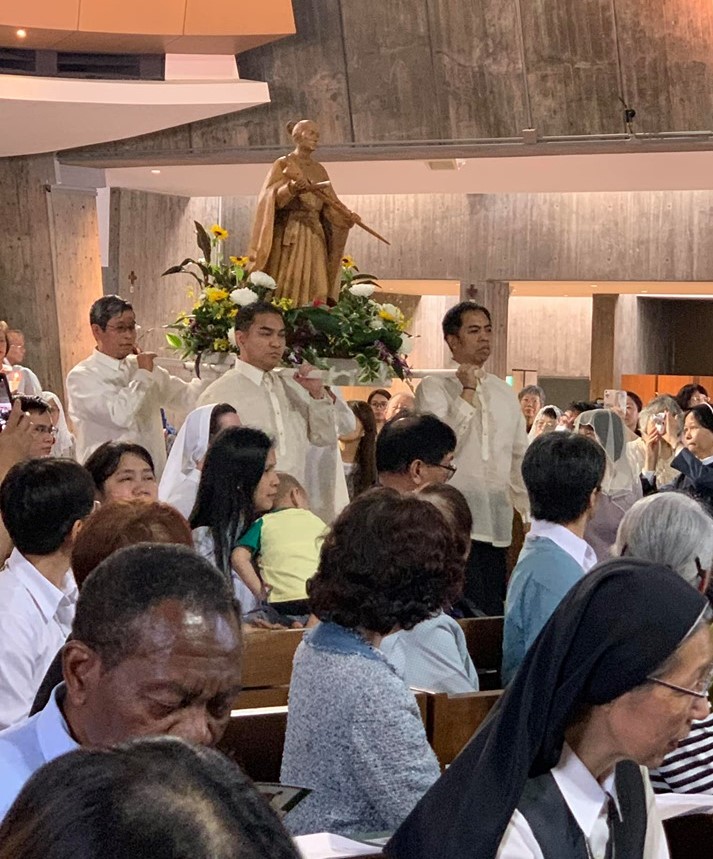 ►As May 12, 2019 was Vocation Sunday, there was a large complement of priests during the Takayama installation. 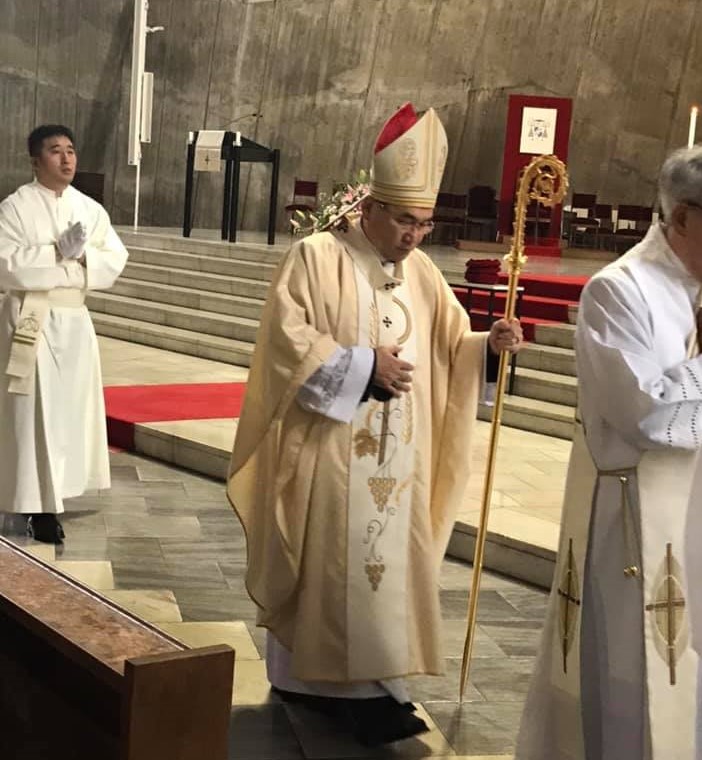 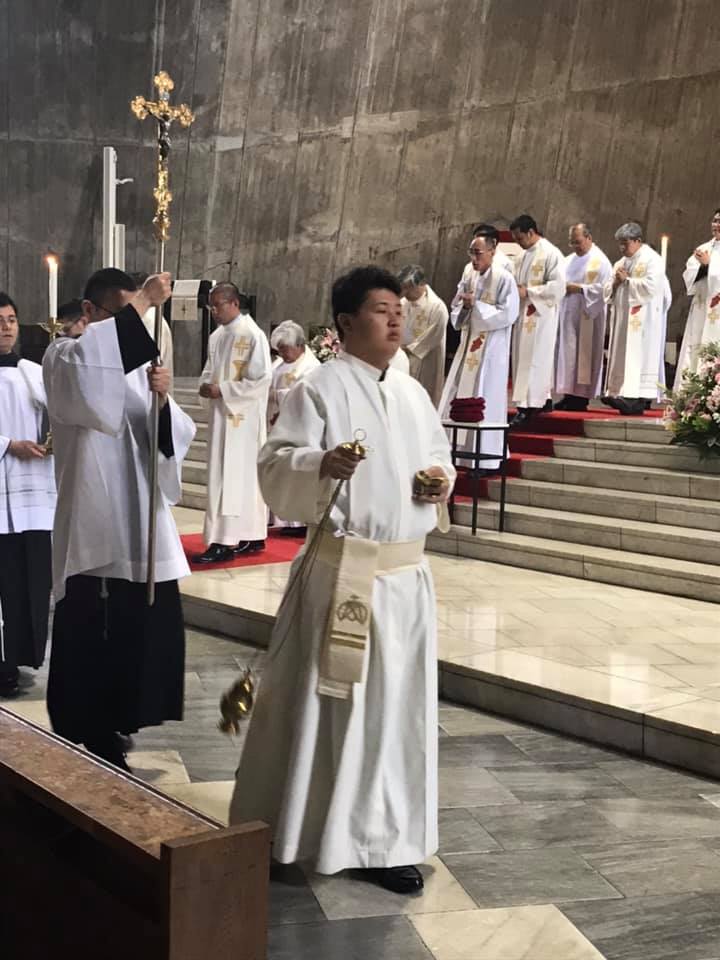 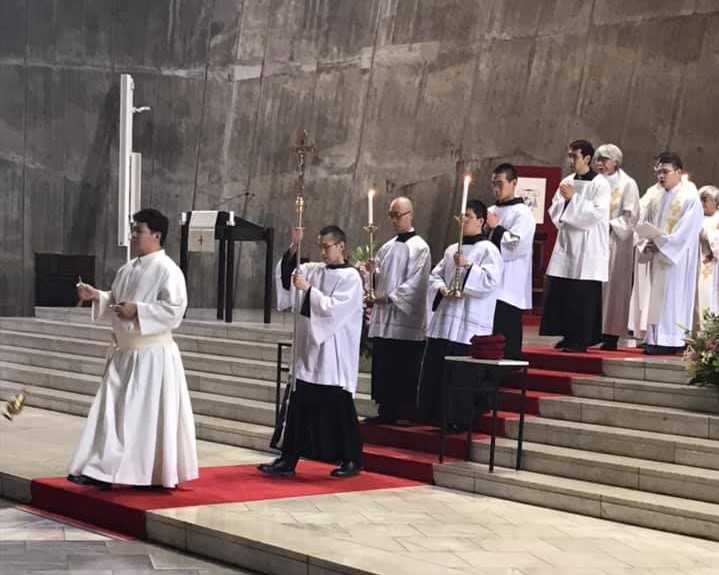 Takayama Hymn ‘To the End’ Was Sung

►The words and music of the Takayama Ukon hymn were written  by Jay Gomez (of the Jesuit Ministry of Music, Manila)

“How do we make the choice
As you have made to hear His voice?
What did you see? What did you know?
All that you had, for Him, you let go.

Takayama Ukon, we will follow your lead.
Together as one, His call, we shall heed.
The life that you lived will show us the way.
Walk us through this journey.
We will not astray.

You honored and loved the Father
In the midst of martial power.
You stood by the church, held on to His word,
Withstanding the draw of this blinding world

Takayama Ukon, your faith is esteemed
A reminder that we, through CHRIST, are redeemed.
Takayama Ukon, you did not bend.
While there’s fear and doubt in others,
You believed in Him to the end.”

“To the End Hymn”was sung by 💥Soloist Redd Sumpaico (from Himig Koenji), with 💥Puchie Velez on the piano.

Prayer-Card(‘Estampitas’) in Japanese and English

►The Takayama Intercessory Prayer, composed by Fr. Johannes Laures, SJ in the 1940s — was printed with an image painted by the late Noel Velez, a Takayama devotee who painted a number of Takayama images — and distributed to the congregation. 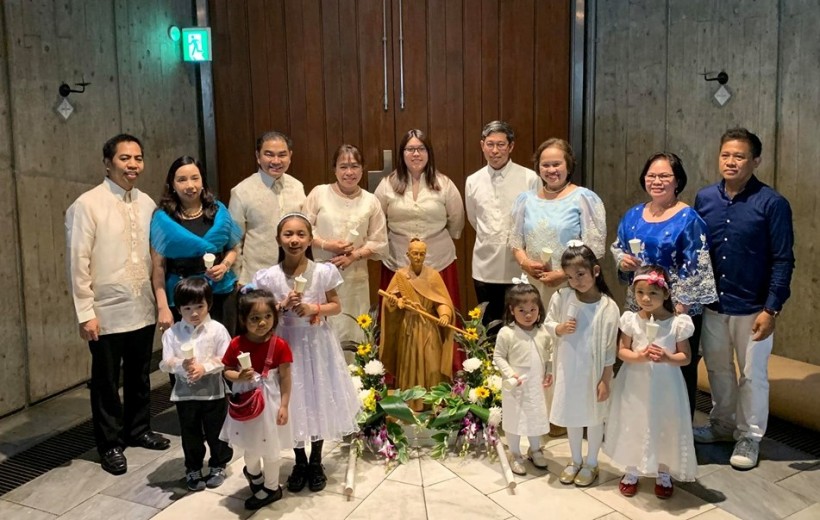 ►The Filipino community in Tokyo attended the installation. 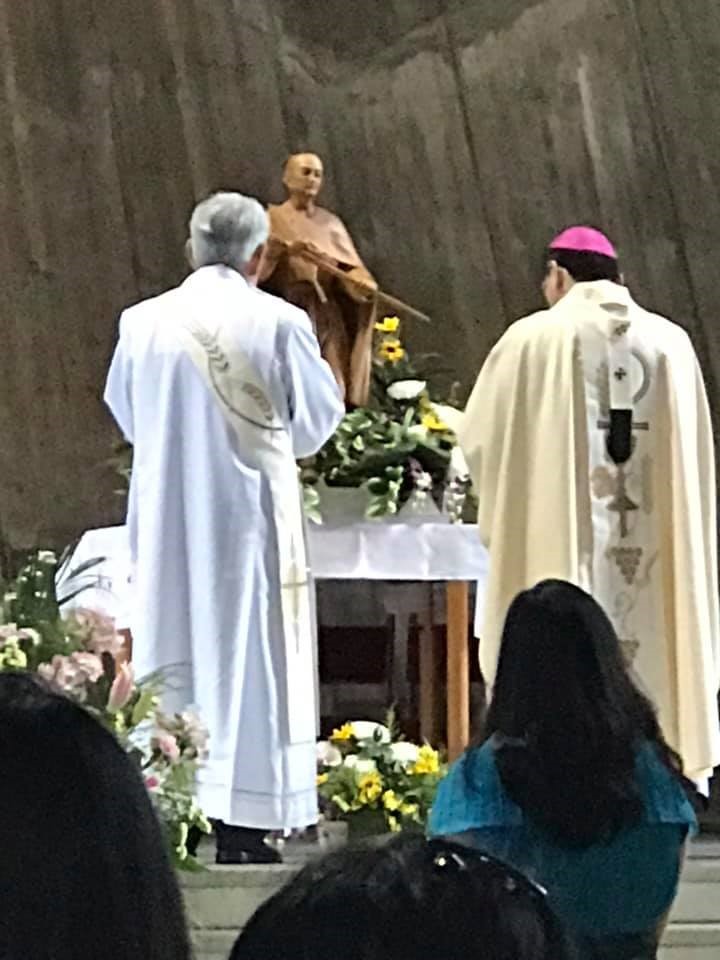 ►As we begin today’s Mass for Vocation Sunday, we will first have the blessing of the statue of Blessed Justo Takayama Ukon which will be brought to the altar with a procession by our brothers and sisters from the Philippines. Later, this statue of the blessed martyr will be placed at the rear portion of this Cathedral.

As you know, Takayama Ukon was a warlord (daimyo) who refused to abandon his religion even though the repression of Christianity became increasingly severe, leading him to give up so much.

After Toyotomi Hideyoshi issued an edict expelling the foreign missionaries, Ukon chose to give up all his possessions in exchange for protecting his faith. In 1614, during the time of Tokugawa Ieyasu, he was expelled to Manila, and on the following year, died there on the 3rd of February 1615. Ukon had to let go of everything, including leaving his own motherland, only to keep the faith, thus, the Church considers him a martyr, and beatified him in 2017.

There is a reason why our brothers and sisters from the Philippines brought this statue here. Blessed Takayama Ukon, who died in Manila, is venerated even in the Philippines, and a statue of him is also erected in Manila. The Filipinos have become a moving force in the Cause for the beatification and canonization of Takayama Ukon — researching, praying together for his canonization, and collecting donations from different church communities.

Today, we receive this statue as a gift, but it would not have been possible for this statue to be shipped and brought into this cathedral without the great efforts of our Filipino communities in the Archdiocese of Tokyo. I would like to express my gratitude to all of you, especially for shouldering all the expenses.

I believe it is fitting that Blessed Takayama Ukon is honored in this Mass for Vocation Sunday. A Japanese who has been beatified, had crossed borders, transcended cultures, and to date is venerated in the Philippines, tells a lot about the universality of the Church.

With the Philippine Church accepting Takayama Ukon as a brother of the same Christian faith during his last days and until now honors his life with respect, further strengthens the ties between the Japanese church and the Philippine church.

At the same time, as we support each other, we affirm each other in the life of faith.

It also teaches us clearly that our faith has universal value transcending cultures and nationalities.

For this year’s World Day of Vocations, Pope Francis released a message entitled “The Courage to Take a Risk for God’s Promise.” The Pope pointed out that responding to the call of Jesus is a big challenge in life as he states, “Every vocation is a summons not to stand on the shore, nets in hand, but to follow Jesus on the path he has marked out for us, for our own happiness and for the good of those around us.”

Responding to Jesus’ call does not mean that you stay in a safe place and do nothing. It is not an easy task but it involves putting ourselves on the line and continue facing the challenge with great courage. The Pope continues to say that, “embracing this promise naturally demands the courage to risk making a decision… Responding to the Lord’s call involves putting ourselves on the line and facing a great challenge with our whole body and spirit.”

The very life of Takayama Ukon is truly about “putting oneself on the line and confronting great challenges with courage.” Even if he loses his position and fame in the society at that time, his attitude to keep faith is firm and strong. He could have made a compromise somewhere, and he would have walked his life without much trouble. However, Takayama Ukon did not make that choice. I think that the life of Takayama Ukon was a life that had the courage to continue facing challenges and holding on to his decision to respond to the call of the Lord.

Just as the Pope himself mentioned in his message, when we speak of vocations today, it is not limited only with priests and religious. Every Christian has his own vocation. Therefore facing challenges with courage is not only for special persons with specific roles, but rather a necessity for all Christians. The Pope writes: “I think of the decision to marry in Christ and to form a family, as well as all those other vocations associated with work and professional life, with the commitment to charity and solidarity, with social and political responsibilities, and so forth. These vocations make us bearers of a promise of goodness, love and justice.”

As we receive today the gift of the statue of Blessed Justo Takayama Ukon, I believe it is appropriate that it coincides with the celebration of Vocation Sunday. Let us learn from Justo Takayama Ukon, who heard the voice of the Good Shepherd and followed Him and we pray for his intercession that like him we may also hear the voice of the Good Shepherd.#

“During today’s Vocation Sunday Mass, a statue of Blssed Takayama Ukon donated by our Filipino friends in Manila was blessed. Grateful to our Filipino community in the Archdiocese.”

One thought on “Tokyo Cathedral Installs Altar-Statue of Blessed Takayama”