The Martyr Church of Japan

►As of 2019, Japan has 42 Japanese Saints and 394 “Beati” (Blessed). All these Catholics venerated in churches around the world, were group martyrs who — except one — were processed in only four batches:

◘ The 26 Martyrs of Nagasaki (martyred 1597; beatified 1627; canonized 1862). This first group includes St. Pedro Bautista (1542-1597), former Superior of all Franciscans in the Philippines and founder of the Franciscan Monastery at San Francisco del Monte, Manila — before he was sent to Japan in May 1593 as personal envoy of Governor-General Gomez Perez Dasmariñas to Hideyoshi. After his diplomatic chores were done, Bautista was allowed to stay on to establish a Franciscan mission.

◘ Alone among them, Blessed Takayama was individually promoted and studied at the Congregation for the Causes of Saints (CCS). Originally promoted as a Confessor – necessitating a study of his entire life and heroic virtues since his Baptism on June 1, 1563 — he was later promoted as a Martyr – when Pope Francis issued a Decree of Martyrdom on Jan. 21, 2016, recognizing Takayama as “a layperson … from Japan [who] died from the hatred of the Faith on Feb. 3, 1615 in Manila, Philippines.”

Cardinal Angelo Amato, Prefect of the Congregation for the Causes of Saints, described the new Blessed as “an extraordinary witness of the Christian faith in difficult times of opposition and persecution.”

As lay promoters of the Canonization Cause of Blessed Takayama, we implore your parishioners to devote a prayer session to study Takayama’s heroic virtues. Pray for him to intercede with God – in the hope God would favor him with his grace.

Blessed Takayama is just ONE miracle away from Canonization.

Despite the shedding of so much martyrs’ blood, Japan remains 99.3% Shinto-Buddhist today – (only ONE in 330 Japanese is Catholic!) — as Pope Francis will find out there are only 509,000 Japanese Catholics when he visits Japan in mid-November, 2019.

The Philippines – Third Largest Catholic Nation in the World

The Philippines, where over 86 per cent of its 102.25 M population profess to be Catholics, has a total of TWO Filipino Saints, THREE Blessed, SIX Venerables, and SIXTEEN (16) Servants of God — over five centuries of Christianity.

With the celebration of the 500th anniversary of Christianity in the Philippines in 2021, focus is intensifying on the many saintly people who have energized the Philippine Church in the past five centuries.# 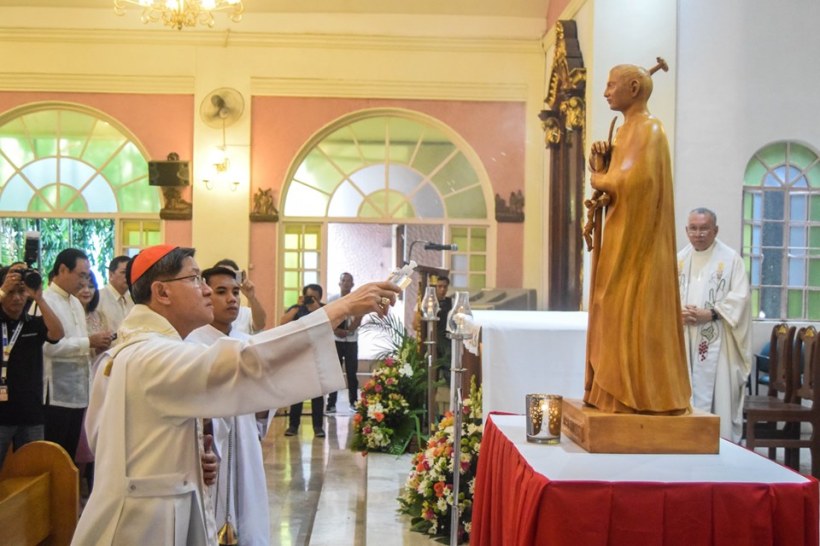