►TO BE CLEAR: The celebrated “Samurai of Christ,” Dom Justo Ukon Takayama (高山右近, 1552-Osaka-1615 Manila) — known at the Vatican as “Dom Justo Ucondono” — never set foot on Europe, but he had a wide footprint there – in books and theater plays. Europe, which was the source of all Jesuit missionaries sent to Japan, was fascinated with all things Japanese … and its most illustrious Catholic convert.

►Ever since the Italian merchant Marco Polo (1254-1324) wrote about Japan (which he called “Zipangu”) in his book 📖 “The Travels of Marco Polo” (Venice: c1300), describing his travels through Asia between 1271 and 1295, the Western World has been fascinated with a kingdom no one had yet visited. Marco Polo was the first European to write about Japan but it is unlikely that he visited Japan at all. Most likely his accounts were based on what he heard about Japan in China from sailors involved in the failed Mongol invasions of Japan (元寇, Genkō), which took place in 1274 and 1281, when Kublai Khan of the Yuan dynasty attempted to conquer Japan.  Marco’s account of the Mongol invasion of Japan is very sketchy because he heard of the invasion only from the Mongols.

The first three Europeans to arrive in Japan in 1543 were Portuguese traders who landed by accident at the southern tip of Tanegashima, where they would introduce the arquebus firearm to the local population, who eventually reconfigured it into the Tanegashima (種子島), a matchlock gun that changed warfare in the Japanese archipelago. Within ten years of its introduction upwards of 300,000 tanegashima were reported to have been manufactured. The tanegashima eventually became one of the most important weapons in Japan. 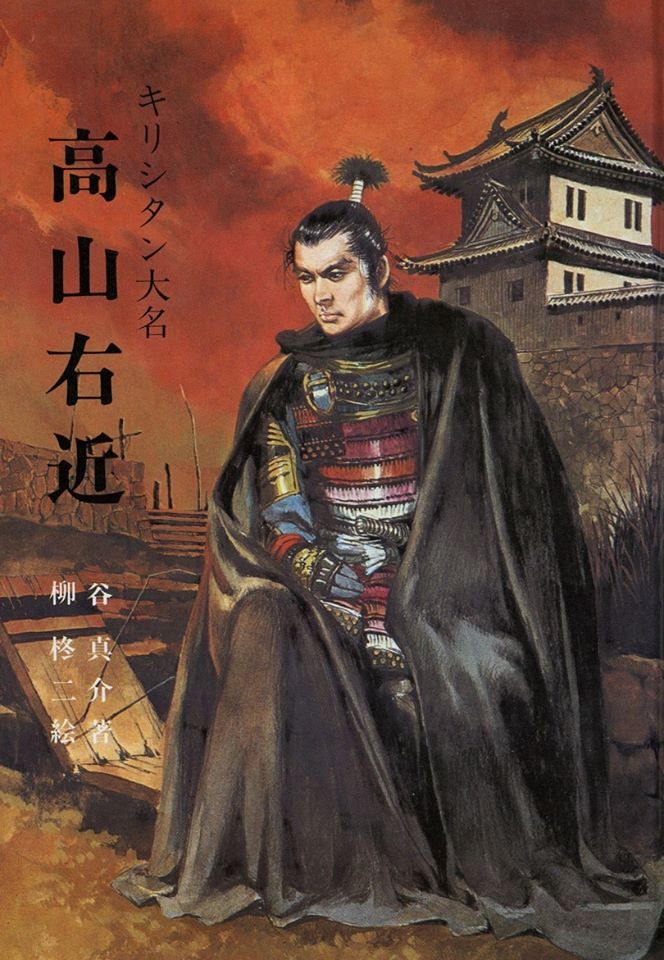 ►With Dom Justo Ukon Takayama considered by the Jesuits as the greatest Japanese missionary of the sixteenth century, the Jesuits who were all Europeans brought the fame and heroic virtues of Lord Takayama throughout Europe: 🔸Italy, 🔸Spain, 🔸England, 🔸France, 🔸Germany, 🔸Austria, 🔸Switzerland, and 🔸Belgium. It is odd that there is no imprint from Portugal where most of the early Jesuit missionaries originated.

►1618? — P. Pedro Morejon, SJ, 📖 “Persecution against the Catholike Christians in the Kingdome of Japonia.”

►1619-1621 — P. Pedro Morejon, SJ, 📖 “A briefe relation of the persecution lately made against the Catholike Christians, in the kingdome of Iaponia: diuided into two bookes. Taken out of the annuall letters of the fathers of the Society of Iesus, and other authenticall informations.” Written in Spanish, and printed first at Mexico in the West Indies, the yeare of Christ M. DC. XVI. and newly translated into English by W.W. [William Wright, SJ].

This was a biography of Takayama Ukon written in Spanish by Ukon’s Spanish father-confessor, Fr. Pedro Morejon, SJ, and first published in Barcelona, then translated into English by Fr. William Wright, SJ. As the Jesuits were banned in England since 1604, this was published by the underground Jesuit press in St. Omer, France. All these — within four years of Takayama’s death in Manila! 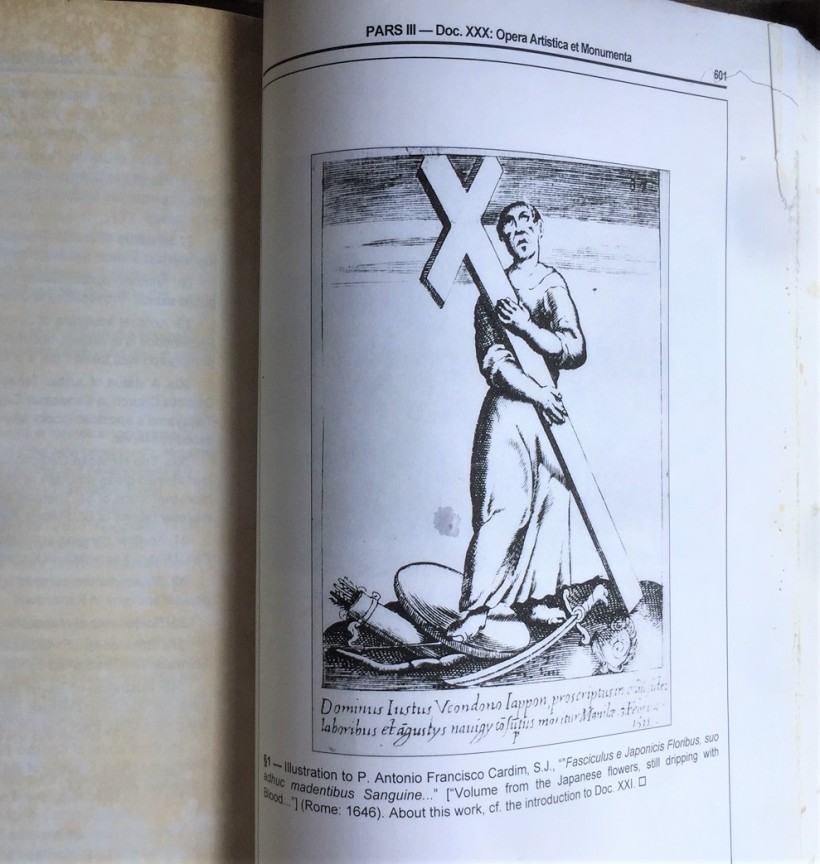 ►1663-1742 – USE OF JESUIT THEATER PLAYS TO PROMOTE TAKAYAMA — By 1600, the Jesuits had over 200 schools, universities, and seminaries, most if not all of which offered some kind of public performance as part of the educational process. By 1706, that number had increased to 769 schools all over the world. In some parts of Europe, the Jesuits held a virtual monopoly on education, including parts of France, Austria, southern Germany, and Spain. And almost without exception, all of those schools performed plays, resulting in a huge body of dramatic literature and numerous public and private performances. According to Robert S. Miola, in the seventeenth century, “at least one hundred thousand (100,000) Jesuit dramas played on European stages.” (“Early Modern Catholicism: An Anthology of Primary Sources,” 2007, 329).

The performers and the audiences alike were the school’s students, although parents, patrons, and other personages of note would be invited to attend certain performances as well. Cardinal Richelieu, Cardinal Mazarin, and Louis XIV were all supporters and regular patrons of Jesuit drama in France.

►1663 – First Jesuit play 🎭 about Lord Takayama is presented this year. Even an incomplete survey of the plays about Takayama shows how his fame spread throughout Europe, and played a role in the development of European drama.

Based on the research of Fr. John Baptist Muller, SJ (📖 “The Jesuit Drama,” Augsburg, 1930), and Fr. Thomas Imoos, SMB (professor of German Literature at Sophia University), the Takayama plays were presented from 1663 to 1742. 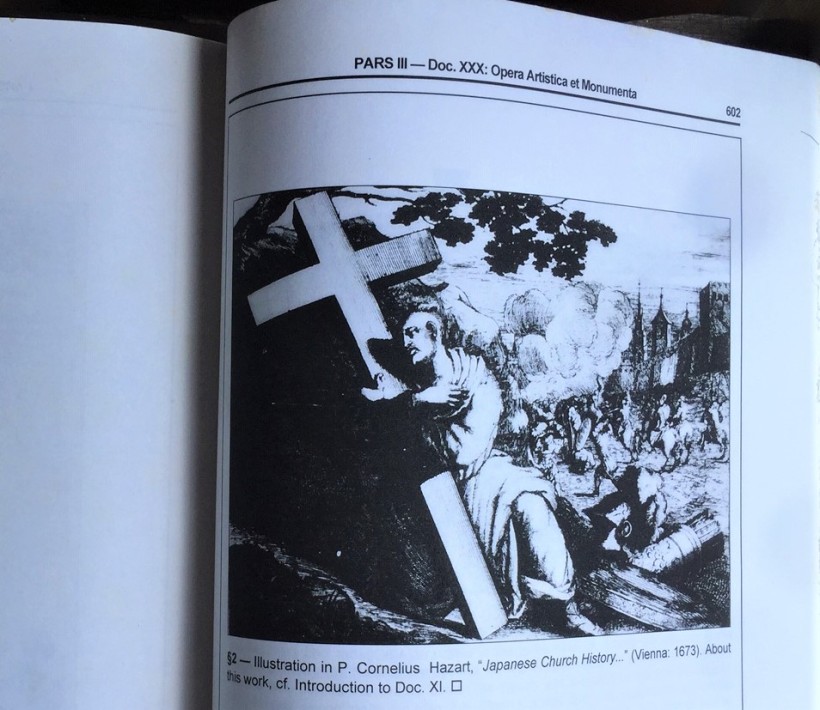 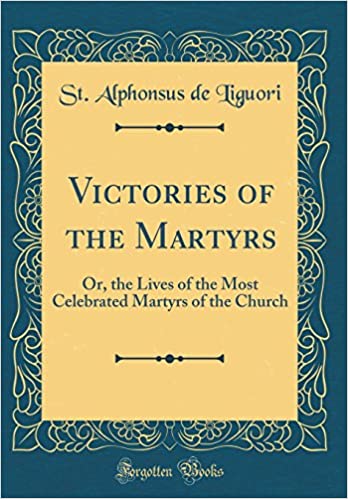 ►1775 – St. Alphonsus Ligouri, 📚”Victories of the Martyrs: Or, the Lives of the Most Celebrated Martyrs of the Church” (1775, 1887, 1954). Researching at the Vatican Archives, Fr. (later, Saint) Alphonsus Maria de Ligouri, CSsR (1696-1787) — “patron saint of journalists” – studied the Takayama papers and concluded that, despite dying in bed surrounded by family, Takayama was truly a martyr.

►1806 — Johann Michael Haydn (1737-1806, “Oratorio for Takayama” (1806). A music researcher at the British Library shared there was a chorus in honor of Takayama composed by the Austrian composer Johann Michael Haydn (1737-1806), younger brother of the more famous composer, Joseph Haydn (1732-1809) who was the most celebrated composer in Europe. The younger Haydn composed a chorus honoring Takayama. “It features a composite of Takayama and Titus,” Fr. Thomas Imoos, SMB (1918-2001) notes. Researchers in Takatsuki, Osaka Prefecture, Japan tracked this down in Salzburg, studied the music, and had a choir sing at a symposium in Takatsuki.

►1912 — MANRESA MOSAIC (1912) – There was a portrait of Takayama Ukon that was part of a mosaic on the nave of the church at the Santa Cueva in Manresa, Spain – which was first published in black & white in the “Tribune” in Manila in September 1942. 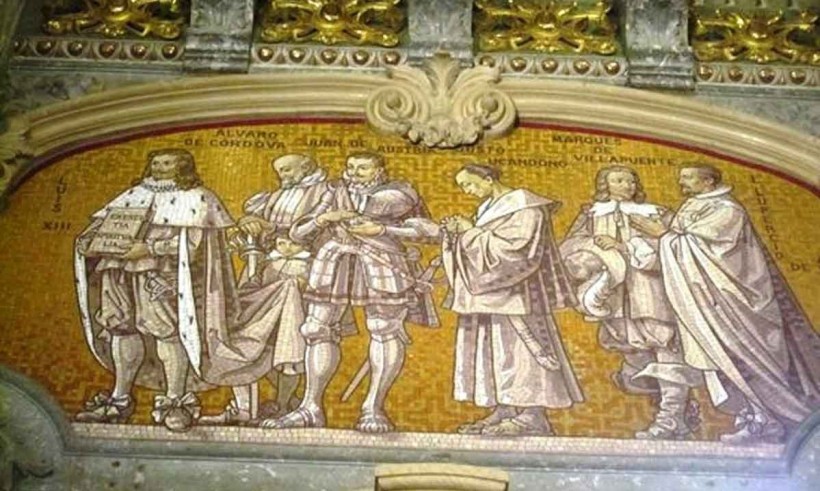 ►This mosaic depicted six Catholic noblemen who were all products of the Jesuits’ famed 30-day “Spiritual Exercises,” namely:🔸the Bourbon king of France, Louis XIII, holding the book “Exercitia Spiritualia”;🔸Don Alvaro de Cordoba, a Spanish grandee whose public life was much influenced by the Jesuit manual;🔸the Hapsburg prince, Don Juan de Austria (1545-1578) — half-brother of Philip II, king of Spain — familiar to Filipinos as the victor of the Battle of Lepanto (1571);🔸Lord Justo Takayama Ukon (identified in the mosaic as “Justo Ucandono”);🔸Marques de Villapuente, renowned in Mexico, Africa and Europe for his charities; and🔸Don Lupercio de Arbizu, the Aragon nobleman who was persuaded by the Jesuits to build Manresa into a city.#